Massachusetts-born Swedish conductor Herbert Blomstedt—who has served lengthy terms as music director/chief conductor with the San Francisco Symphony, Leipzig Gewandhaus Orchestra, Staatskapelle Dresden, and other major orchestras—returns to Symphony Hall to lead the BSO in a program dedicated to symphonies by Mozart, Thursday, February 22-Saturday, February 24, featuring Symphony No. 34; Symphony No. 36, Linz; and Symphony No. 41, Jupiter. 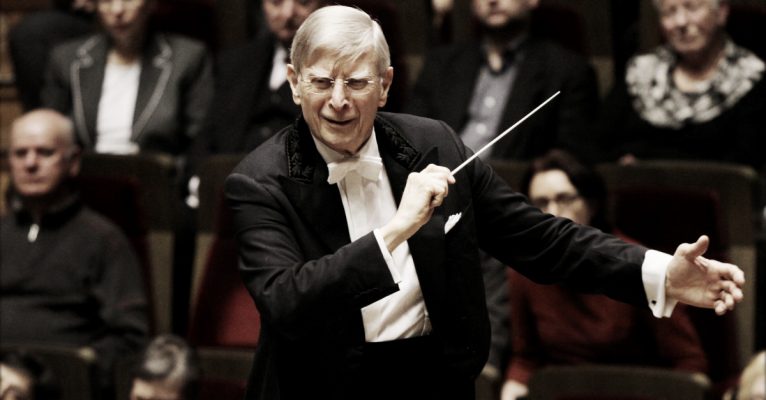 Composed in 1780 for an unknown occasion, the three-movement No. 34 in C major was the last symphony Mozart completed in his native Salzburg before setting off for Vienna. With its energetic outer movements and a particularly understated and introspective central movement, marked Andante di molto, the Symphony No. 34 is a typically sophisticated work for the composer as he approached the height of his genius. The story of his Linz Symphony, No. 36, is one that confirms the full measure of that genius. Passing through the Austrian city of Linz in late 1783 on his way back to Vienna from a Salzburg visit, he was honored with a request for a concert of his music, but had no symphony on hand to perform—so he wrote this delightful piece in a four-day flurry during his stopover.

Mozart’s last and arguably greatest symphony, the Jupiter—a nickname, not the composer’s own, which nevertheless aptly describes the work’s lofty place among its peers—was, miraculously, composed alongside its two also ingenious predecessors (and other works besides) in just six weeks in the summer of 1788. Though it emerged from one of the darkest periods of his life, when Mozart was struggling with debt and the death of his infant daughter, it gives the impression not of tragedy but of dazzling skill and originality of which the composer had a seemingly inexhaustible supply. Especially striking is the finale, in which Mozart combines the Classical idiom with masterful Baroque-inspired counterpoint (Mozart had studied and assimilated the methods of Bach) in a breathtaking compositional tour de force.

Conductor Alan Gilbert and violinist Leila Josefowicz bring Scheherazade.2—a major work by American composer John Adams that received its world premiere in New York with Gilbert and Josefowicz in 2015—to the BSO for three performances Thursday, March 1-Saturday, March 3. The program also includes Debussy’s Jeux, and Sibelius’s tone poem En Saga. Labeled by the composer as a “dramatic symphony for violin and orchestra,” Scheherazade.2 is the composer’s response to the violence that lies at the heart of the story of the “Arabian Nights” and the brutality still visited upon women around the world today. (The work’s title refers to Rimsky-Korsakov’s symphonic poem Scheherazade, which also features an extensive solo violin role.) The program also includes Sibelius’s moody tone poem En saga and Debussy’s Jeux, music from a ballet about an imaginary tennis game and one of the composer’s most influential and innovative pieces.

Jean Sibelius’s atmospheric tone poem En Saga (“A Saga”)—his first and longest work in the genre—features many of the composer’s characteristic touches of orchestration and folk-music-influenced melody. Composed in 1892 and revised in 1902, it is a shadowy and moody work. When pressed to reveal the source material that inspires the piece, the composer responded, “En saga is the expression of a state of mind. I had undergone a number of painful experiences at the time and in no other work have I revealed myself so completely. It is for this reason that I find all literary explanations inappropriate.”

Debussy’s late-period ballet Jeux, commissioned by Sergei Diaghilev for his Ballets Russes, where it premiered in 1913, is a scandalous work from a scandalous time in music history—Stravinsky’s The Rite of Spring premiered just two weeks later. A collaborative project with choreographer Vaslav Nijinsky, who had already caused a stir the year before with his erotic ballet interpretation of Debussy’s Prelude to the Afternoon of a Faun, Jeux is based on an absurdist scenario concerning tennis and a moonlit ménage à trois. The choreography was tepidly received and quickly forgotten, so it is Debussy’s work that almost exclusively perpetuates the ballet’s memory. The orchestral texture and shading are fascinating and ever-changing throughout; this and the mosaic-like assemblage of tiny motifs (akin to those in La Mer) made this one of the most influential of Debussy’s masterworks.

John Adams has explained that the idea for his sprawling violin concerto Scheherazade.2 first came to him while visiting a Paris exhibition that detailed “the history of the Arabian Nights and of Scheherazade, and how this story has evolved over the centuries. The casual brutality toward women that lies at the base of many of these tales prodded me to think about the many images of women oppressed or abused or violated that we see today in the news on a daily basis. … I was suddenly struck by the idea of a ‘dramatic symphony’ in which the principal character role is taken by the solo violin—and she would be Scheherazade.” Adams wrote this work for this week’s soloist, Leila Josefowicz, who premiered it under Alan Gilbert’s direction with the New York Philharmonic in March 2015.