Born For This: Almost There

BORN FOR THIS tells the tale of BeBe and CeCe Winans–mega talented heirs to the first family of gospel music the Winans out of Detroit. The young Winans sibs shot to fame courtesy of titanic televangelicals Jim and Tammy Faye Bakker. Before their ship sank, the Bakkers recognized the groundbreaking talent of teenagers BeBe and CeCe Winans who showed up in North Carolina to audition for their “Praise The Lord” TV Network. In 1982, the young Winans became the first black performers to integrate an all-white gospel service on TV.

The musical charts the Winans journey as they came to dominate the gospel landscape and then cross over to mainstream success as Grammy Award-winning headliners. Surprising side note: family friend and megastar Whitney Houston occasionally showed up to sing back up for them– I didn’t know that! Liisi LaFontaine does the diva proud with the help of some killer costumes, lighting, and a voice that could cut glass. 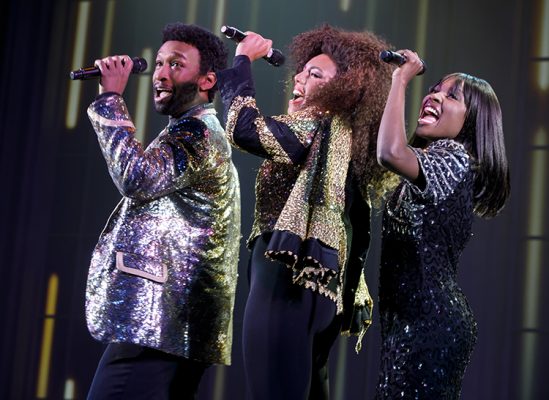 Left to right: Donald Webber Jr. as BeBe Winans, Liisi LaFontaine as Whitney Houston, and Loren Lott as CeCe Winans in BORN FOR THIS – A NEW MUSICAL. Photo © Joan Marcus 2018

The show has instant musical verve and cred. Multi-Grammy Award-winning performer, producer, composer BeBe Winans himself (who was in the house, and took the stage to address the audience opening night!) wrote the original music and lyrics and these songs just work and keep the show moving, from the harmony of the Winans brothers quartet in their matching suits and hilarious, ’70’s – 80’s retro choreography (Warren Adams)  to some truly heart-rending ballads (i.e. “Seventh Son” sung by the sublime Nita Whitaker as Mom Winans.)

The cast is pure dynamite–the aforementioned Nita Whitaker has enormous grace and dignity, and vocals that could summon angels. (Whitaker also happens to be Liisi LaFontaine’s real-life mom!) Milton Craig Nealy as Pop Winans is a powerhouse of a patriarch with a rich voice and a bearing suggesting he could move mountains if so inclined. All the Winans sibs are distinctively voiced; especially vivid is Brad Raymond as the late great, big-hearted Ron Winans.

Chaz Pofahl may look like Jim Bakker but Kirsten Wyatt nails it as the insanely bubbly Tammy Faye, pancaked and chirpy, a vortex of jubilation on stilettos. So sincere yet clueless is she, we’re only a little bit nauseous when she declares BeBe and CeCe “my little chocolate drops.” 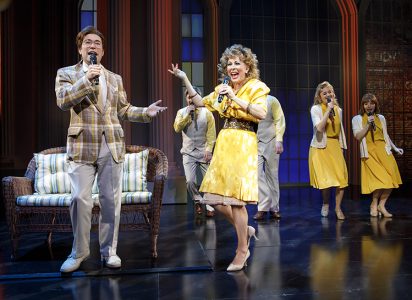 Foreground: Chaz Pofahl as Jim Bakker and Kirsten Wyatt as Tammy Faye Bakker, with members of the Company, in BORN FOR THIS – A NEW MUSICAL. Photo © Joan Marcus 2018

Loren Lott is a beauty as the innocent yet grounded CeCe Winans who we watch grow from a sparkling, talented, vocally gifted teen to a focused artist who has her priorities straight. Donald Webber Jr. shows us BeBe Winans talent and ambition, but the book lets him and us down. They (Director/co-writer Charles Randolph-Wright, BeBe Winans, and Lisa D’Amour) haven’t cracked the dramatic arc in order to sharpen BeBe’s inner conflict about fame, family, and crossing over– professionally and romantically.  I was scratching my head over why BeBe was so upset about his sister’s marriage; in the second act he struggles with an interracial relationship, then just moves forward, toward a big production number and we’re to understand he’s figured it all out. The show needs to excavate the darker issues at play, the depth of the divide BeBe is attempting to bridge within himself, his family, and the fractured world he’s about to take on. Clearly defining a pivot point would help us feel what’s at stake.

Right now, there’s a lot to keep us entertained and engaged, but I’d like to see the second act of BORN FOR THIS born again and take Broadway by storm. See it now at the Emerson Cutler Majestic Theatre through July 15!