Take a Look at Huntington Theatre Company’s Romeo and Juliet 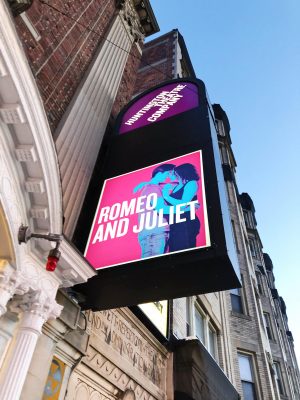 The most famous love story of all time – and the most moving tale of an ill-fated romance ever told –  Shakespeare’s Romeo and Juliet opened at the Huntington Theatre Company last night and runs through March 31. This thrillingly modern production helmed by Huntington’s Artistic Director Peter DuBois is astoundingly current and surprisingly hilarious stars George Hempe and Lily Santiago as the titular star-crossed lovers.

Rounding out the all-star Boston cast are Will Lyman as Friar Lawrence, Matthew J. Harris as Mercutio, Nancy E. Carroll as the Nurse, John Zdrojeski as Tybalt, Maurice E. Parent as Lord Capulet, Marianna Bassham as Lady Capulet, Nael Nacer as Lord Montague and Friar John, Celeste Oliva as Lady Montague, Matthew Bretschneider as Paris, and Omar Robinson as Benvolio, Ed Hoopman as Prince Escalus, Kai Tshikosi as Balthasar and Gregory, Zaven Ovian as Sampson, Khyati Sehgal as Abraham, Dale Place as the Apothecary and the Servingman, and Margaret Clark as Petra.

Get a look at this gorgeously realized production, and check out BosTix Deals for discount tickets to select performances.